Homes for Our Special Needs Animals

From time to time the Bannock Humane Society fosters animals who have Special Needs. The animal might have a communicable disease such as Feline AIDS or Feline Leukemia (FELV). These diseases are not a problem for humans, but are dangerous in the cat population. Other animals might be elderly and have health issues. These special needs animals want to be loved and cared for just like any other living being.

Early December 2022 brought a bone chilling cold across Southeast Idaho which was deadly for humans and animals alike. Huddled down, doing his best to stay warm, was a bony older black dog. How many people had stopped at that rest stop and either did not see him, or did not care? Probably too many to count even if he could think straight between the cold, the aching in his bones, and his pitifully empty stomach. Then a sweet voice of an angel whispers across the howling wind calling to him. Next thing he knew he was curled up in the back of her car moving towards hope. In just a short while his world was changing, there were many dogs surrounding him barking and crying, but all he cared about was that he was starting to warm up and he had a little food in his tummy. Unfortunately, the cold and starvation had taken its toll on this poor guy, then you add shelter stress to the mix and it ended in a very unhappy tummy. Well, this guy was lucky once again when a strange lady came to the shelter and asked to take him home. He had heard the lady talking to the staff saying she would help him fight to get better because she believed in his gentle soul. “I don’t know what your name is handsome, so how about we call you Bramble?” she said to him. He didn’t really know what a Bramble was, but he didn’t care because she talked so gently and kindly to him and stroked his head with love. It was a battle for certain, as he was at least 20 pounds underweight, he had ear infections so bad the doggie doctor couldn’t see in his ears, he now had a nasty cough from being out in the cold, his tummy did not handle the food he was given very well so it didn’t stay in there long, and his bones ached something fierce. But now he got to lay on a nice soft bed in front of the fireplace curled up under the Christmas tree. Talk about the spirit of the season, he went from being alone in the cold to surrounded by love and new friends both human, other doggies, and even kitties. The lady who brought him home seemed to be a pretty good cook, the food was tasty and she helped him put a bit of weight back on slowly. Even though he wasn’t a fan of the medicine for his ears and cough it did make him feel better, so now there was more pep in his step. He was still pretty sore, so she took him back to the doggie doctor to find out what was going on, only to find that at some point he had been hurt possibly by being hit by a car or even falling out of a truck. His right side hip and a few spots on his lower back had developed arthritis from the old injury, but that just meant he wasn’t going to be jumping much. But his new lady, Bramble calls her Foster Mommie, wanted to do everything she could to help him feel better so after multiple treatments and medicines the ache isn’t so bad now either.

Bramble almost felt like a young pup again, despite his peppery gray dapper gentleman’s kiss. Squeekie toys are fun, so is going for walks, and even meeting new friends. Bramble is still cautious as he doesn’t want to be hurt, so calm friends are his favorite as well as older kids. He is a good boy and always lets you know when he needs to go out and go potty, though the injury caused nerve damage which has resulted in a small amount of leakage control problems which are being corrected. Foster Mommie just lays a blankie over his bed to make cleaning easier as it sometimes happens during the sleepy time, she says it is nothing more than a toddler who doesn’t know how to wipe their bum very well.

Bramble can tell he is loved even though he remembers the time before when someone would hit him. It is a bit confusing, but Bramble has learned to trust again, in exchange he feels the need to warn everyone of those STRANGER DANGERS!! One who doesn’t know better might think his warning howl is him in pain, but no he just wants you to know he is protecting you. Don’t worry he is quick to stop if told to do so. He has great manners, walks well on the leash, doesn’t get into the garbage or counter surf. He has grown out of the young puppy chewing stage, and we estimate him to be between 5-8 yrs of age. He still has many years left in him to love and be a wonderful companion. Are you patient, and kind? Do you want a handsome, dapper gentleman as a perfect Valentine?

Pets for the Elderly 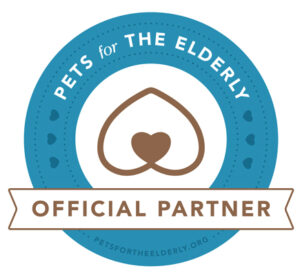